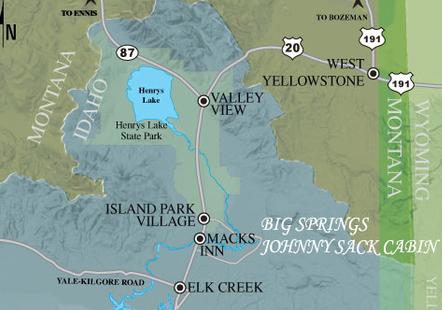 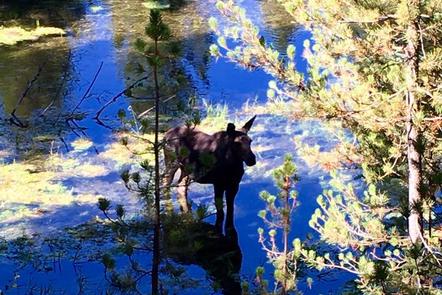 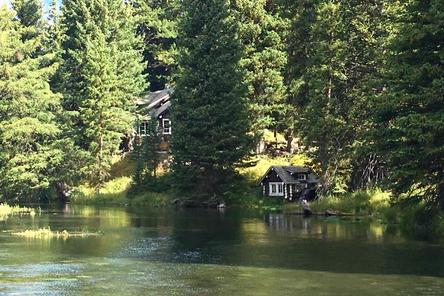 In 1929, Johnny Sack leased a small tract of land from the United States Forest Service and began building his log cabin at Big Springs. Little did Johnny know when he first acquired the choice building site, his home would become a landmark one day discussed in the United States Congress.

Due to its unique location and picturesque setting, Johnny’s cabin and nearby water-wheel have long been one of the most photographed sites in Island Park. The cabin attracts thousands of visitors each summer interested in the log and stone structure as well as the building’s colorful creator.

The cabin is open to the public from mid-June through mid-September, and visitors are invited to visit and see firsthand the unique craftsmanship of one of Island Park’s early settlers. One of Johnny’s trademarks is the split bark decoration used in the cabin’s furniture and interior. He took great pride in detail work. One ceiling lamp, still hanging in its original location, contains seventy-two individual handcrafted pieces of wood. A double bed was made of ninety-six wood pieces which Johnny nailed and glued together. Today many of the individually crafted pieces of wood furniture Johnny created for his home remain in their original location.

The cabin took approximately three years to complete, as Johnny worked primarily with hand tools — saws, draw knives, scrapers and planers. Johnny built a small structure and water-wheel at the edge of the springs to harness the power of the springs and create electricity.The cabin became part of the National Register of Historic Places in 1979 and is the property of the USFS. The cabin remains open to visitors through the efforts of the USFS, Fremont County Parks and Recreation, the Island Park Historical Society, and numerous volunteers.

Producing over 120 million gallons of water each day, Big Springs a Natural National Landmark, is one of the 40 largest natural springs in the world. The springs create the headwaters of the Henrys Fork of the Snake River which travels across Fremont County creating spectacular scenery at Upper and Lower Mesa Falls. With a constant temperature of 52 degrees, the springs is home to rainbow trout, muskrats, ducks, moose and other critters. It is not unusual to see osprey and eagles dive for a meal of fresh fish from the springs.    Moose also frequent this area. 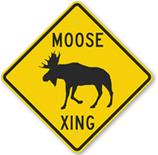